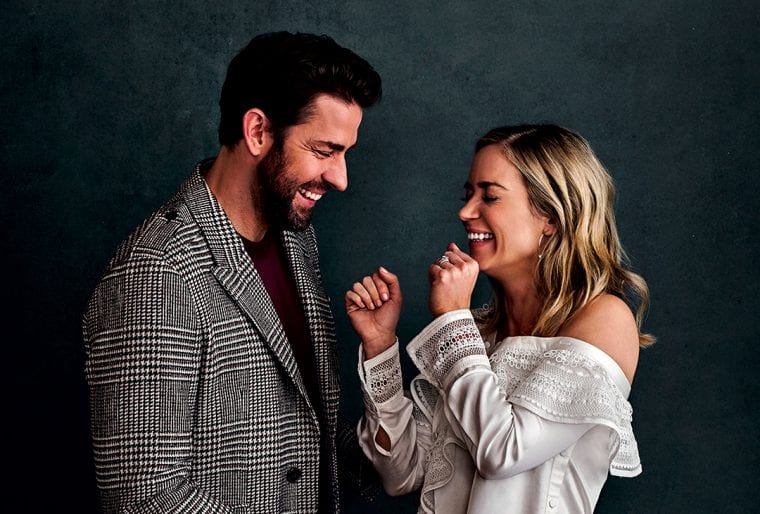 Ever wondered how Emily Blunt and John Krasinski maintain a ten-year marriage, lucrative careers, and a growing family?

If you ask Emily or John, they may say it was “love at first sight.” After exploring their birth charts and love synastry, I believe the stars were aligned in their favor.

Although Astrology isn’t the only tool to uncover a couple’s relationship compatibility, it is an excellent practice to reveal the secrets behind Emily Blunt and John Krasinski’s epic Hollywood love story. 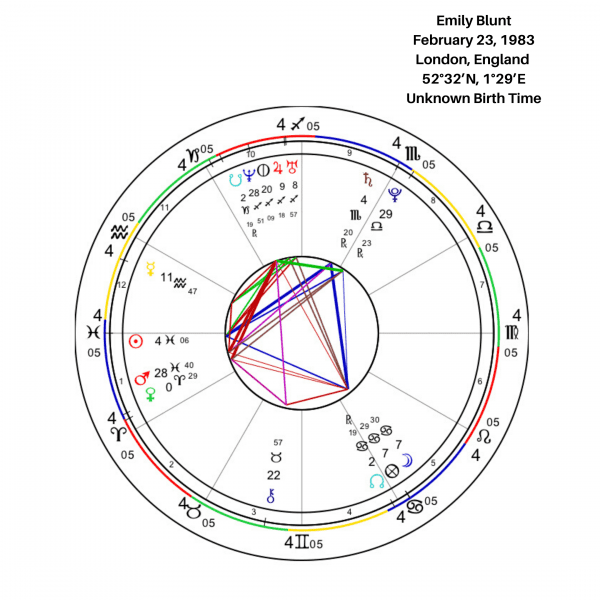 Emily Blunt, a wife, mother, and award-winning actress, is known for her compassionate and selfless spirit on and off the big screen.

Born on February 23, 1983, in London, England, Emily Blunt is a sensitive and creative Pisces Sun and Cancer Moon.

Although Pisces Suns are known for their intense emotions and unusual connection to the spiritual realms, Emily Blunt is one of those rare Pisces Suns who channel their emotions into art, and this is supported by her Cancer Moon.

What I love about this double water placement is the depth of transparency that Emily is willing to show in all areas of her life.

Like most Pisces Suns, she naturally gravitates toward creative work. But Emily Blunt is not superficial.

Because Pisces is the opposite sign of Virgo, which represents work, routine, and organization, Emily has a natural intensity about her that is evident in everything she does.

I’ve found this to be very common in Pisces Suns who dedicate themselves wholeheartedly to their work. When motivated and focused, they can tap into a level of inspiration that no other sign can.

On the other hand, Emily may go through frequent dips in her career. This is because Pisces is a mutable water sign, meaning she goes with the flow; she never has one set direction.

Even though Emily is devoted to her career as an English-American actress, writer, and artist, her Cancer Moon inspired her to build a stable home and start a family. We can see this in how well she balances her career with mothering her two daughters, Violet and Hazel.

When it comes to love, Venus influences how Emily receives and expresses love and affection. Because her Venus is in Aries, she is naturally competitive and self-reliant; she desires self-expression and originality in love.

Venus in Aries also inspires a woman to know what she wants; she won’t wait to pursue the one she loves. We can see this in her “love at first sight” experience with John Krasinski. It didn’t take the couple long to realize they were ready to tie the knot.

What I find interesting is that Emily’s Mars is in Pisces (the same sign as her Sun), highlighting her desire for a man that is sensitive, artistic, and oddly mystical.

She wants someone that she can feel safe with. She is aroused by emotional displays of affection and love. 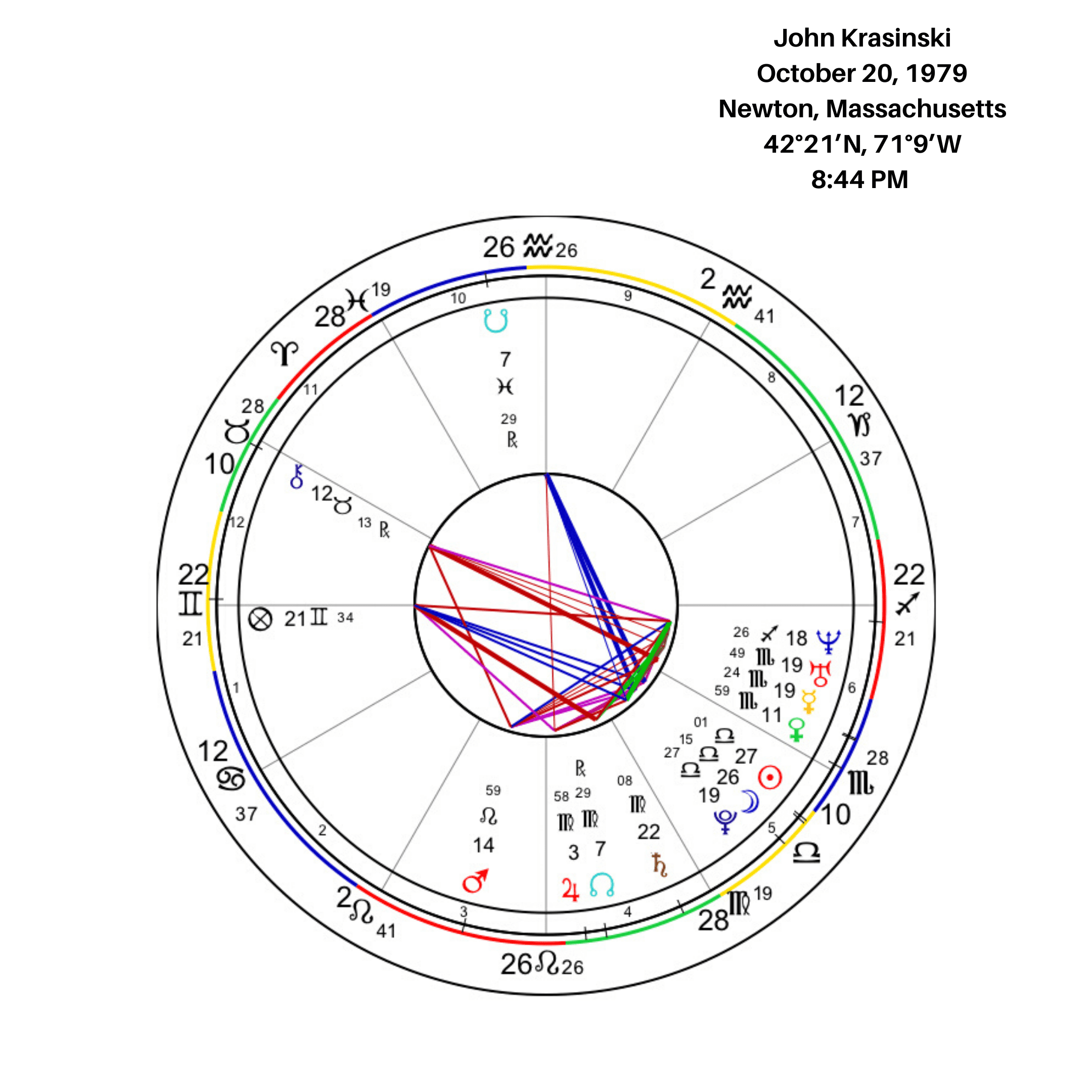 Much like his water-driven wife, Emily Blunt, John Krasinski is a famous actor, writer, filmmaker, spouse, and parent.

What I find most interesting about John’s birth chart is his 5th house Sun placement. In astrology, the 5th house is ruled by the Zodiac sign Leo. It represents self-expression, self-esteem, creativity, and pleasure.

Because the 5th house also rules drama and theatre, I’ve found that most famous actors and actresses have Leo or the 5th house dominant in their charts, especially if they are a Gemini, Sagittarius, or Leo Rising.

Libra Suns also make excellent entertainers, as their air placements make them intellectual and charming communicators with above-average social skills. This explains John’s natural gravitation towards acting and entertaining, which probably started at a young age.

His Libra Sun in the 5th house also indicates an early marriage or deep attraction to love, which can be seen in his “instant” connection with Emily Blunt.

Fifth house Libra Suns are also more likely to date someone who shares their career. This is because they will share a mutual understanding and common ground.

Being a Gemini Rising, John finds his strength in the written and spoken word. This can be seen in his love for writing, directing, and often acting in his own productions.

Gemini Risings are also natural comedians. I believe this is why he had his big break with the scripted comedy series The Office.

With his Libra Moon supported by his Libra Sun, John Krasinski is a hopeless romantic. Dominated by the element of air, he is most attracted to the woman who can stimulate him mentally; he needs an intellectual connection to feel aroused.

John’s Venus in Scorpio in his 6th house, which is ruled by Virgo, makes him a loyal and devoted lover, and because of this placement, he will most likely marry only once.

To balance things out, Mars, which determines how one behaves and expresses their willpower, is in his 3rd house of Leo.

Mars in this placement represents someone light-hearted and carefree. Even though his Venus in Scorpio is intense and passionate, his Mars brings a level of youthfulness and joy to his relationships and sex life.

I would describe John Krasinski as a serious man with a young heart. 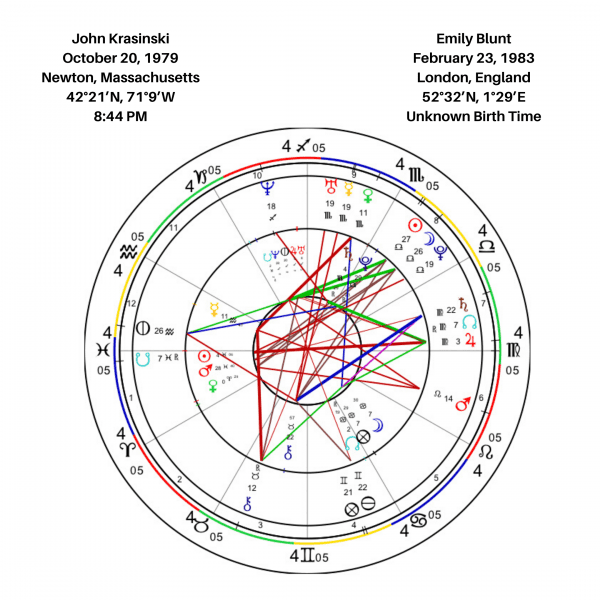 Ten years of marriage is a milestone for any couple, but it’s especially remarkable for international movie and tv stars like these two.

Although some would say their charts are not compatible, I find their differences alluring and fulfilling. Their charts are complete opposites, giving them a range of diversity and complexity that other couples often lack.

I love that Emily is what I would call the “heart” of their family. She has a sense of vision, ease, and knowledge that John admires and has grown to respect and love.

John is the “brains” in this marriage. He brings the ideas and information that Emily would rather not deal with, and together, they make the perfect match.

To explore their compatibility even more, I am going to explain their synastry based on their Sun and Moon signs.

Read next: Everything You Need to Know about Prince Harry and Meghan Markle’s Love Compatibility

For starters, Emily Blunt is a Pisces Sun, and John Krasinski is a Libra Sun. Even though Pisces and Libra have several important differences, I believe this is what makes their relationship so special and unique.

Because Pisces Suns are reserved, intuitive, and naturally creative, Emily needs to feel safe and protected for her to feel emotionally and romantically fulfilled.

Unlike other Sun signs, she needs regular intervals of solitude and silence in a relationship. With John being a talkative Libra Sun, this can be challenging for him.

Naturally, John’s Libra Sun makes him more outgoing and sociable than his Pisces wife. Unlike Emily, he needs constant affection and attention to feel loved and appreciated. He will have a hard time being separated from her, and his Libra Moon is the reason.

What I find interesting about this is that both signs are surprisingly needy. A Pisces is constantly looking for someone to help or save her, and a Libra will go out of his way to please his partner.

Although this could lead to unhealthy codependency in a relationship, it could also lead to shared independence that only a Pisces and Libra Sun would understand.

Both signs genuinely want to help each other grow, and John and Emily will find their connection rare and beautiful.

However, I’ve found that Pisces and Libra Sun couples have a hard time staying grounded unless they share a common goal.

With Pisces being a mutable water sign who is known for the ability to daydream, and Libra being a cardinal air sign who can sometimes struggle with making a decision, these two can get lost fast.

But underneath the “confusion” are two Sun signs with unlimited potential for creative and artistic expression.

With both Libra and Pisces interested in music and the arts, they are most likely each other’s greatest muse. This can be seen in their shared projects like their joint film, A Quiet Place.

If I could give Emily some advice, I would tell her:

“I suggest being more open and transparent about how you are feeling in low moments. As a Pisces Sun, you are always processing. And like a mirror to your skills of perception, John is always watching you.

Instead of assuming that he is on the same page as you, practice open communication. The more you can communicate your feelings, the deeper you will connect.”

Read next: The Ultimate Secret Behind Justin and Hailey Bieber’s Marriage: Love Compatibility

In relationships, the Moon signs and placements represent how each partner processes and expresses their emotions.

With Emily a Cancer Moon and John a Libra Moon, an intense desire for love and romance brings these two conflicting signs together.

Emily’s Cancer Moon favors intimacy, family, and security more than she favors romance, and this can be challenging for John’s Libra Moon.

Emily’s Cancer Moon influences her to process information on an emotional level, which causes her to retreat often into her hard shell.

Because of the sensitivity shown in her Pisces Sun and Cancer Moon, Emily may have a difficult time trusting others or showing her true colors in public.

This makes her a homebody who prefers a quiet night in over a wild night out.

On the other hand, John’s Libra Moon influences him to process and express on a more logical and intellectual level.

Unlike Emily, who feels her way through situations, John rationalizes and thinks.

Because of his air-driven Sun, Rising, and Moon, John will often over-analyze Emily’s intense and sometimes unexpected emotions.

This can cause him to feel resentful or misunderstood. John’s Libra Moon prefers socialization and new experiences; he will feel trapped if he constantly stays at home.

With two completely different ways of expressing their emotions, Emily and John will have to develop firm boundaries of self-respect and understanding to make their love last.

But much like their Sun signs, once they stop competing, Cancer and Libra have a way of softening each other.

With time, patience, and compassion, Emily and John have the potential to remain an excellent team as parents, business partners, and lovers.

In terms of compatibility, I give Emily Blunt and John Krasinski a score of 8 out of 10.

Although their relationship can be challenging at times, I believe their differences lead to more similarities, and because of this, they have a rare foundation of family, romance, passion, and friendship.

On the other hand, their desire for success, achievement, and creative self-expression could lead to insanely busy schedules.

For them to maintain their health and relationship, they will need a flexible routine that fits both of their needs. But as with all cardinal and mutable air and water signs, this shouldn’t be a problem.

My advice to them both would be to continue building their life the way they see fit. As long as they stay true to their higher purposes and hearts’ guidance, I believe these two have the potential to be together for a lifetime.

Are you wondering how well you and your love are matched? Are you dating a Libra man?

Try out my free compatibility quiz to see if you and your partner are in it for the long-haul.

And while you’re at it, go ahead and download my digital guide Libra Man Secrets for the best tips and advice on attracting a Libra Man.

How He Breaks up With a Woman According to His Sign: What to Watch For!

5 Things Every Woman Should Know About the Scorpio Full Moon