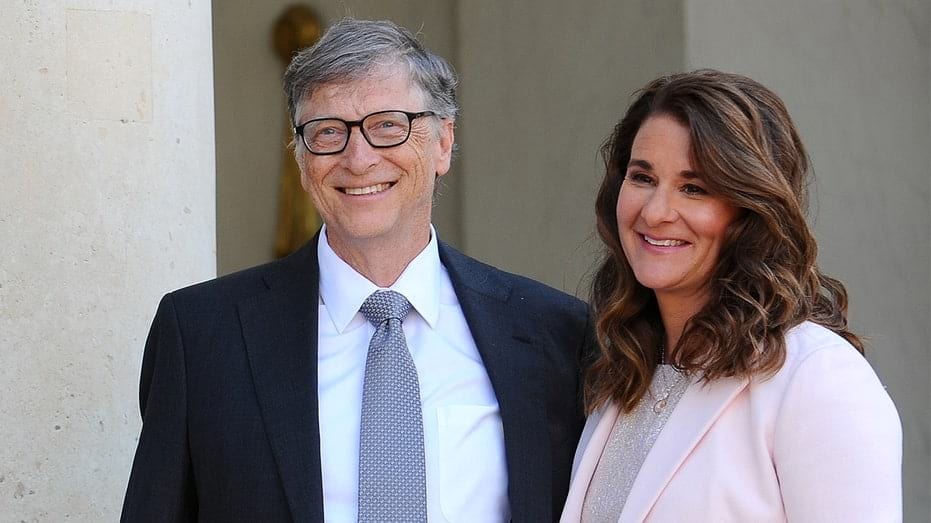 What Astrology Says About Melinda And Bill Gate’s Divorce

It has been such a shock to the world to hear that Bill and Melinda Gates’ have announced their divorce after 27 years together. This couple seemed pretty indestructible, but as reports have come through, they have stated that they “no longer believe that they can grow together.”

We all have reached a point in a relationship where we have felt uncertain as to move forward or move on from a partner. But is there more to their divorce than what we might expect or come to learn through the media?

This makes me curious to find out what the Astrological reason is behind their split, and what we can learn from it. Sometimes the planets do crazy things, and it is up to us to rise to the occasion and adapt and go with the changes.

From a glance, things seem particularly hectic for Bill at the moment Astrologically, but before we get into the juicy stuff, let us take a quick look at both Bill and Melinda’s Sun and Moon signs.

A Quick Overview Of Bill’s Sun And Moon 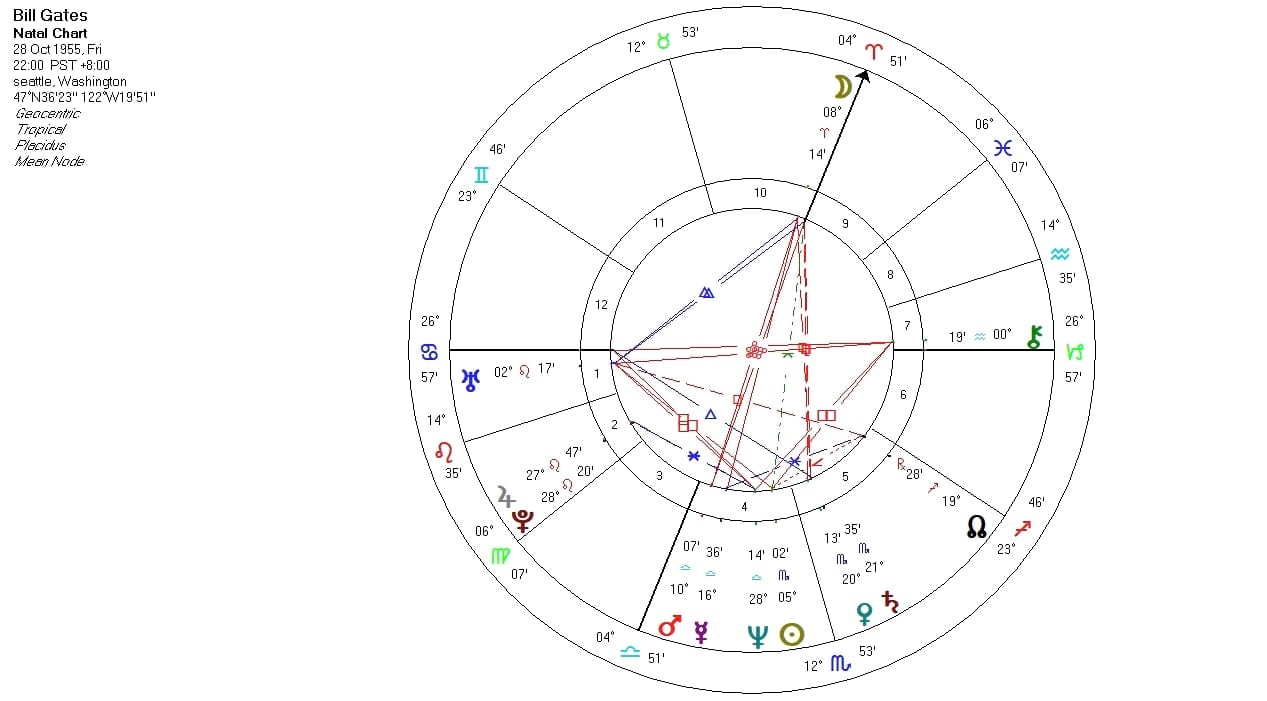 William Henry “Bill” Gates III (born October 28, 1955) is an American business magnate, investor, author, and philanthropist. With a lot of power comes a lot of responsibility.

He’s one of the most influential leaders of the 21st century, thanks to his co-funding Microsoft in 1975 with Paul Allen. What he has created has pretty much influenced everything about the world today.

Bill Gates yields quite a lot of power in the world, which makes sense seeing that he’s a Scorpio. Probably the most powerful and determined sign of the Zodiac.

Scorpios operate on an instinctual level, always researching and analyzing every situation they find themselves in. They are also known for their incredible smarts, drive, bravery, and detective skills.

Bill has achieved a tremendous amount of success in his life, and that is the thing with Scorpios, they have unwavering will and determination. They must achieve and they do, by using their perseverance and high expectation

This is only amplified by his Moon in Aries, which gives him a pioneering spirit. He needs to be first and the absolute best at what he does. An Aries Moon is strong-willed, impulsive, and always up for adventure.

Knowing this makes it rather easy to see how Bill has amassed so much power over the years. Mars, the planet of action, ambition, drive, and determination rules both his Sun and Moon.

A Quick Overview Of Melinda’s Sun And Moon

Melinda was born on the 15th of August 1964, in Dallas, Texas. She is known for her philanthropic work and for co-funding The Bill & Melinda Gates Organization, and of course, being married to Bill Gates.

But she is not the type of woman to sit on the sidelines, this woman is a force to be reckoned with herself. Considering that she’s a Leo Sun and a Scorpio Moon, two signs you better not mess with.

Leo Suns are brave, proud, generous, and warmhearted. They have an amazing charismatic streak, and find it easy to grab people’s attention. People are drawn to Leo’s natural leadership skills and feel-good energy.

It is very common for a Leo to want the best for everyone around them, and this is quite easy to see with the amount of charity work she is involved with. She has the best intentions and wants to make the lives of others a little more comfortable.

Her Scorpio Moon gives her an edge. This is a very powerful position for the Moon to be in. Scorpio Moons are very mysterious, secretive, and somewhat alluring. They have killer instincts, and won’t suffer fools.

Life is very black and white for a Scorpio Moon. Their emotional responses can be very extreme, they are also reluctant to be vulnerable and completely open with people.

No one truly knows a Scorpio Moon because they are so good at hiding and only revealing what they intend to. The interesting thing about this is that a Scorpio Moon has a remarkable skill at gathering information, they know more than anyone could ever suspect.

This makes Melinda extra powerful, and comparing her chart with Bill’s, I would say she was definitely the one to wear the pants in the relationship. This is simply a woman who won’t take anyone’s nonsense.

But Why The Sudden Split?

For the purposes of this article, I’ll only be discussing the transits affecting Bill’s chart because Melinda’s birth time is currently unknown, which makes it impossible for me to be completely accurate.

To the rest of the world, it may seem like quite a surprising ending, but I’m not so sure that the split has been that sudden. Bill’s chart has a lot going on at the moment, and it has been for quite a while.

Bill has a Capricorn Descendant. This is the part of the chart that rules significant relationships like a marriage or business partnership, and at the moment Pluto, the planet of endings, transformation, cycles, and healing is on his Descendant.

To me, it definitely seems like their divorce has been written in the stars. This cannot be a simple time for either of them, but especially for Bill. When an intense planet like Pluto makes such a powerful move in his chart, the experience has to be rather intense.

I suspect Pluto has caused a big change to the power balance of their relationship, a point of transformation for them both. This planet digs up anything stuck in the unconscious of the human psyche.

My gut reaction is that they grew apart and stopped agreeing on very important issues. The interesting thing to note with both Bill and Melinda is that they both have planets in fixed sign, his Sun and her Moon in Scorpio, and her Sun in Leo.

Fixed signs absolutely hate change and disruption. They like to follow a routine and be in control. They are not the type of people who find it easy to go with the flow and adapt to new situations.

And unfortunately, when Pluto comes to shake things up, the best course of action is to surrender and let the situation unfold as it wants to. But for two fixed signs, this can prove pretty impossible.

It seems like Bill is experiencing a lot of lessons to do with loss and letting go of control. It is important to mention that any placement in Scorpio is extremely private, so for both of them to have all their personal business blasted all over, the news must be very difficult and rather uncomfortable.

Another interesting thing to mention about Scorpio is that it also represents wealth, resources, debts, and your spouse’s money. This is going to be a very pricy divorce, and considering the role of Pluto in this couple’s split, I can only imagine that it is going to be quite a hit to Bill’s personal net worth.

What Is Jupiter’s Role In Their Break-Up?

In Astrology, Jupiter is one of the good guys. It is the planet of blessings, luck, and expansion. Whatever it touches, it helps to grow. But too much of a good thing can be a terrible thing as well.

When life feels a little too overwhelming and too much to handle, then you can bet that Jupiter has something to do with it. And in Bill’s chart, Jupiter happens to be going through his 7th house as well.

This is the house of his marriage, absolutely amplifying any marital issues they may go through. And as it moves through the 7th house and enters the 8th house of debts and other people’s money, I think it’s safe to say that Bill is going to lose a significant amount of his riches in the divorce.

My Final Thoughts And What We Can Expect

I don’t think this is the end of all the drama; I have a feeling a lot of secrets are about to be dredged up and revealed to the public, which is completely against the nature of this Scorpio Sun and Moon couple.

This break up is ultimately about the power struggles this couple has to face. A Pluto break-up is never pleasant, but it is very necessary for the transformation and healing of the couple. I have a feeling both Bill and Melinda are about to pay quite a few of their karmic debts.

We just have to wait and see how they handle it, but we can be sure that this parting is going to be complex and full of nuance. We can only hope that this couple has the emotional support to handle such a deep and transformative time such as a Pluto break up.

Have you ever gone through a breakup with a powerful and intense Scorpio? What was your experience like, and do you have any advice on how to deal with leaving such an enigmatic man? Then please leave a comment below.

Are you interested in learning more about Scorpio men? Then why not check out my link to find out some helpful tips in dealing with these ambition guys, take a look right here!

Wishing you a lot of luck in love.

What Kind Of Mother You’ll Be, Based On Your Zodiac Sign

The Little-Known Connection Between Astrology And Tarot

Mars in Leo: It’s Time To Follow Your Heart

How The Solar Eclipse In Gemini Will Change Your Relationship

Bennifer Reunion: Are The Planets Working In Their Favor?

Why Saturn Retrograde Is A Great Time For Commitments

How To Get The Most Out Of Gemini Season: Everything You Need To Know