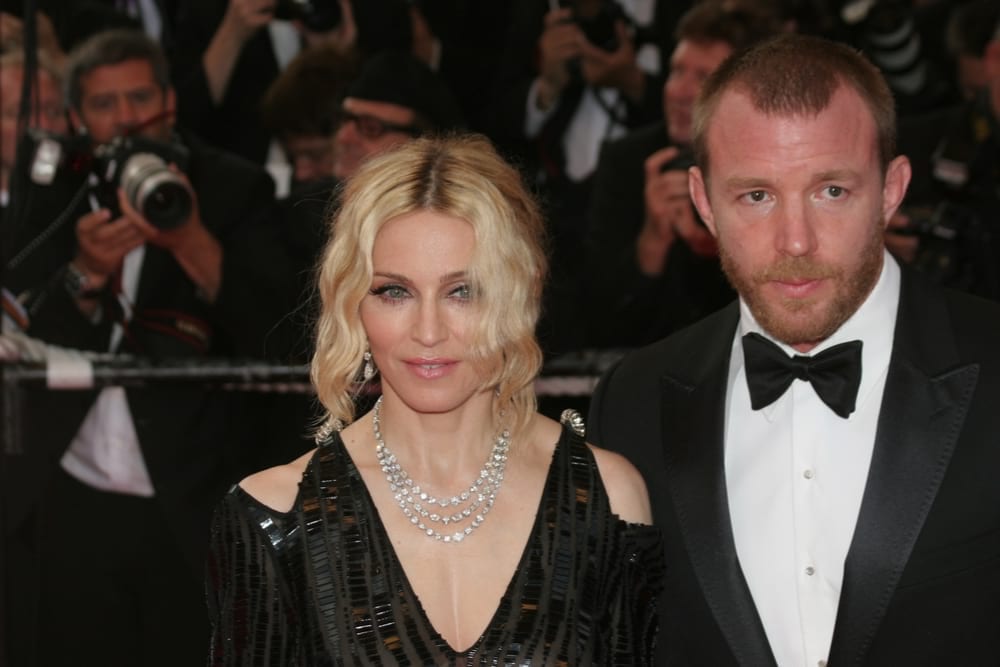 The Astrological Compatibility Of Madonna And Guy Ritchie

But what attracted these two to one another to begin with? What kept them together for the eight years they were with each other? What drove them apart?

It’s important to review what makes these two tick as individuals before we dive in to why they didn’t work as a couple. After all, they were both two parts of the whole, so we must look at both halves!

Madonna was born Madonna Louise Ciccone on August 16, 1958 in Bay City, Michigan. Madonna was always known for her eccentric behavior and razor-sharp intellect, being one of the highest scoring students in her class. She also had a tendency to do cartwheels and flips in between classes, so that her underwear would be exposed!

Just based on her Sun, Moon, and Rising, Madonna is going to deeply desire high praise from her partners. Nothing makes a Leo purr like hearing sweet nothings from her lovers! She would be highly motivated to stay in relationships that feed her ego. Considering the fact that she’s literally Madonna, who wouldn’t be feeding her ego?

Her Sun sign of Leo makes her a total romantic, since Leo is king of the fifth house of Astrology, house of flirtation and dating. She is the ultimate catch in the eyes of many… no wonder she launched into the limelight with such ease!

Her Virgo Rising and Moon mean that she desires a flawless lover! In her eyes, her partner should be the epitome of perfection – or at least on their way there. She enjoys a partner who is into self-improvement and who takes her well-meaning advice.

Madonna’s Taurus Mars in a healthy trine relationship to her Virgo Moon and Rising means that her sex life and her drive and passion are displayed through her emotional nature. Having sex makes her feel emotionally satisfied and being desired helps her self-image in a big way!

When evaluating what Madonna needs in a relationship, we can take a look at a few factors that will shed some light on the subject. For instance, looking to her Venus is going to tell us exactly how and who Madonna tends to love.

Madonna has a dramatic Leo Venus in her eleventh house. Since Venus is love and adoration, and the eleventh house is community, it’s safe to say that this is at least partially why she is loved by the masses! But this also means that whoever she loves should be entertaining and theatrical, and likely famous himself!

Her Venus is making what’s known as a square relationship to Neptune. Neptune is a planet of art and poetry but also of illusion and fog. This essentially means that Madonna often doesn’t see her romantic partners accurately, casting a rosy glow over their perhaps unsavory natures… Madonna totally wears blinders when it comes to the faults of her lovers!

Her desire for her partner is characterized by her Mars placement. Mars is the planet of red-hot passion! It is where we get our get-up-and-go, as well as our sex drive and our relationship to conflict and disagreement.

Madonna’s Mars is located in Taurus in the ninth house. Taurus is a sign of sensuality, but it also displays the kind of things we like to own. As a result, Madonna is likely a possessive lover who gets what she needs out of sex. Her partner can be like her plaything that she uses for her enjoyment… at least in the bedroom!

Guy Ritchie was born on the 10th of September, 1968 in Hatfield, England. He ditched the academic scene at the young age of fifteen, and jumped immediately into the film industry.

Guy is a discerning Virgo Sun and a fiery Aries Moon. This might explain why he was so eager to exit school, since Aries knows what they want and doesn’t mind taking bold risks to pursue it. His Virgo Sun indicates that what he cares about he will perform to absolute perfection!

Guy’s Virgo Sun indicates that he is a critical thinker who is likely whip smart. Virgo is ruled by Mercury, planet of intelligence and communication. This could mean that Guy is attracted to those who mirror his intellect and who also are willing to improve upon themselves.

An Aries Moon means that in love, he needs some gool old fashioned passion! He wants the intrigue, the cat and mouse, and most of all, he wants great sex! He is the type who thinks of life and love as a competition, and he is in it to win it. He wants very much to win the heart of his lover like a chivalrous knight.

Guy’s Venus, the planet of love and romance, is in accommodating Libra. Venus is happy here, meaning it’s operating at peak capacity. This indicates that he embodies Venus’ kind, loving, and charismatic nature. His lovers are sure to be very beautiful, as well as full of charm and grace.

Guy’s Venus is sitting right on top of Mercury in a conjunction. Mercury is already an important planet in his chart due to his Virgoan nature. This adds significance to his love life since his Sun’s ruler is placed right upon Venus. In order to feel motivated, intellectually stimulated, and satisfied, he is going to need a meaningful partnership in his life.

Guy’s Mercury and Venus only aspect each other. Translation? No other planets or points in his chart are touching these planets. This means that the significance of his mental process in love is amplified by huge amounts!

Guy’s Mars is sitting pretty in fabulous Leo. He is likely dramatic and showy in the bedroom, aiming to impress his partner in his love-making style. His showiness means that if his actions don’t get applause in the bedroom then he is likely left feeling deflated and devoid of sexual drive.

Like Madonna, his Mars trines his Moon, meaning that his emotional state is intertwined with his passion and sex drive. He feels better overall in life when he has something to fight for during the day and someone to make love to at night!

Sun And Mars… A Double-Edged Sword

When looking at how Guy and Madonna interact with each other, I have a sneaking suspicion that the same thing that brought them together is the same thing that tore them apart. Their relationship may just affirm the adage that you can indeed have too much of a good thing.

How can this be you ask? Well, let’s talk a little bit about Sun contacts in relationships! The Sun speaks to our vitality, the reason we get up in the morning, and our motivation. It is the life spark within us all that keeps our hearts pumping. Without a strong Sun we can find ourself saddened and folding back from participating in life.

Now imagine that both of these two have their partner’s Mars (planet of sex, passion, and desire) on top of their Sun. This involves two of the most energetic bodies in the Solar System in the strongest relationship possible between two bodies… planetary or physical bodies that is!

Madonna states that the electricity flowed immediately upon their first meeting, and I absolutely see how that was true. Guy’s Leo Mars in conjunction with Madonna’s Leo Sun and Madonna’s Virgo Mars conjunction with Guy’s Virgo Sun is an extremely intense energy signature.

How does this translate to real life? Well, to put it frankly, I know these two had some absolutely amazing sexual chemistry. This is the type of signature that could create a couple who can hardly leave the bedroom or they take the sexcapades outside of the bedroom!

This is an exciting and arousing configuration that can surely create a couple who seeks adventure and stimulation. But there is a darker side here that cannot be ignored.

Mars is a planet of war and the Sun is our identity. This means that both Madonna and Guy likely felt that the other was threatening (Mars) their very being (Sun) just be existing. Each one likely had qualities that the other found sexy at first, but may have become irritating or downright provoking to the other!

It’s interesting to note that Madonna cited Guy’s actions (Mars) as the reason for her divorce. This makes total sense to me, since both of them likely found the behavior of the other to be at least occasionally outlandish and over the top.

I have a sneaking suspicion that perhaps things between Madonna and Guy weren’t totally over with after their divorce. I’m not one for celebrity conspiracy, but all the signs of a potential rebirth in their chemistry is evident! Don’t hold your breath though, because you and I would never hear about it… bummer!

Guy’s Aries Moon makes him the type that thrives on new beginnings and rebirths. He thrives on the idea of potential. His Moon sits in Madonna’s eighth house, the house of the phoenix and rising from the ashes after a “death” of sorts.

I have noticed that this energy signature creates a couple whose relationship may die and become reborn several times in their lifetime. It’s very likely that even after Madonna and Guy split, they lingered heavily on one another’s minds.

As frustrating as their obviously contentious relationship was, there was a part of both of them that absolutely loved the filthy, dirty challenge of it all.

If I had to guess, these two would not get back together romantically. Aries is a sign of sex, not intimacy. However, I can certainly see these two occasionally fanning one another’s sexual flames from time to time.

If they haven’t reconvened sexually yet then I would wager the possibility is there. A part of each of them never quite got over the other sexually and they’re totally turned on by how naughty and taboo it would be to just, you know, try it out again!

Not to mention that the ruler of Madonna’s house of relationships is in the sign of Scorpio. Scorpio thrives on the secretive and the things that people are scared to speak about. Reuniting with the man she publicly divorced from would be just dangerous enough to pique her interest big time!

Read next: The Astrology Behind Sharon and Ozzy Osbourne’s Long & Stormy Marriage

Phew! These two have the sort of powerful energy together that could spark a beautiful firework show or an epic war. If I had to guess, the two of them experienced both sides of the coin in their relationship together, though it seems like the dark side of their relationship won out at the end of the day.

I’m totally fascinated by this couple and I’ve gotta hear if you’re as captivated as I am. What’s the most compelling aspect of their relationship to you? Do you think they’re getting it on in secret? Let me know down below in the comments!

And if you’re a Leo woman dating a Virgo man like Lady Madonna, then take my quiz here to find out if he’s your one and only!

And if you want to dive deep into the psyche of your Virgo man then you’ve gotta check out my book Virgo Man Secrets. You can find it right here.

Wishing you all the luck in the Universe,

One thought on “The Astrological Compatibility Of Madonna And Guy Ritchie”