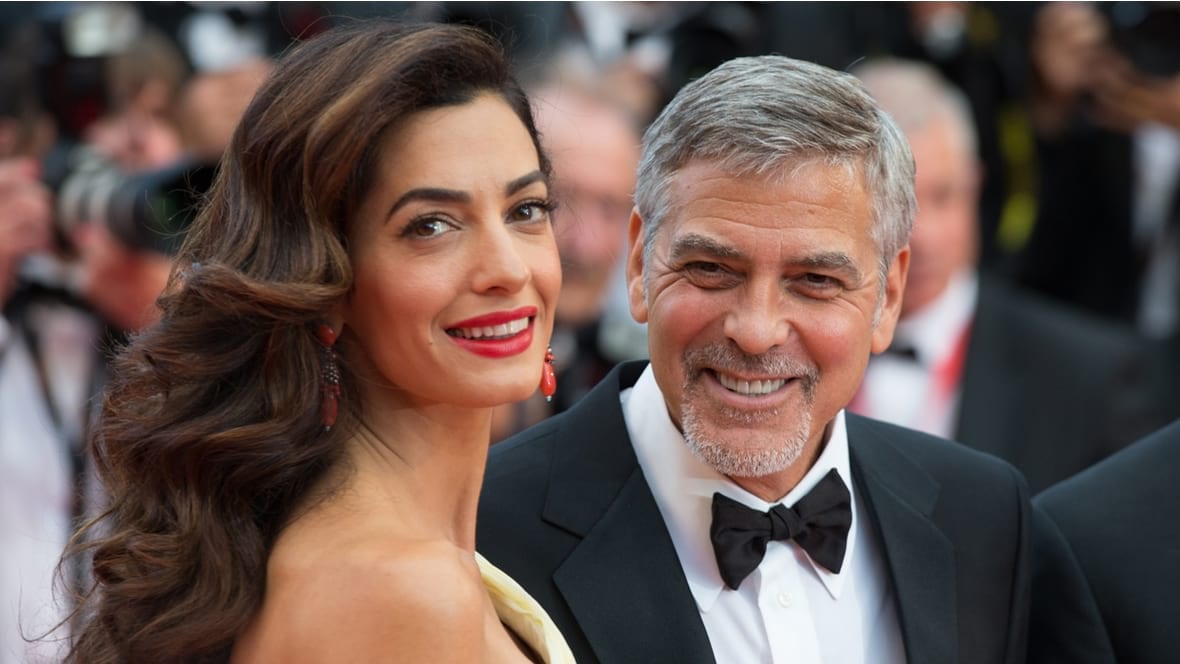 I don’t know about you, girl, but when I think of George Clooney, I think of pure class. He’s been the dreamboat of Hollywood for decades and man oh man do I see why!

Even as he turns sixty this May of 2021, I don’t know any woman who likes men who would decline a little love from Mr. Clooney… at any age!

Alas, we can all lower our hopes, since the man who spent decades being considered Hollywood’s most eligible bachelor settled down with Amal Clooney (nee Alamuddin) in 2014… and what a catch she is!

George Clooney is a Taurus man and it shows. Ruled by Venus, planet of good appearances, his outward appearance is nothing less than classically handsome… but what else does it mean to be a Taurus man?

Through his life and relationships (or lack thereof) we can infer a lot about what makes a Taurus man tick and what traits Taurus men really embody in practice.

I can’t resist, so I am going to grab this bull by the horns. Let’s discover what George Clooney can reveal to us about the nature of Taurus men.

What We Can Understand From George Clooney’s Chart

When we say that George Clooney is a Taurus, we mean that he is a Taurus Sun. There are many planets and points in a birth chart in addition to the Sun, but many Astrologers consider the Sun to be the body of utmost importance in the chart.

The Sun represents our essential being, who we are, and what drives us forward. It basically determines what gets us out of bed in the morning.

What does this mean for Mr. Clooney? Well, his Sun is in Taurus which indicates a lot about his personality.

Taurus’ are strong, steadfast, and they’re all about that bread… literal bread and the monetary kind!

They are concerned with Earthly practicalities and pleasures including food and money, in addition to physical furnishings.

A Taurus is all about value. As much as they love money, they don’t spend it frivolously. This makes sense since George has never been flashy with his money. He keeps a low profile.

The position of the Sun in the chart and anything near the Sun will further determine the nature of the Sun. His Sun is in the second house. Trust me when I say this is a fabulous indicator for George Clooney!

Taurus feels most at home in the second house as the sign and the house influence each other in a big way.

Mercury rules thought processes, practical intelligence, and communication. This indicates that George Clooney is an intelligent and sensible person who thinks logically with ease.

So, how does all of this equate to what George Clooney can teach us about Taurus men in love? Keep reading to find out what we can infer from his relationship with Amal Clooney! 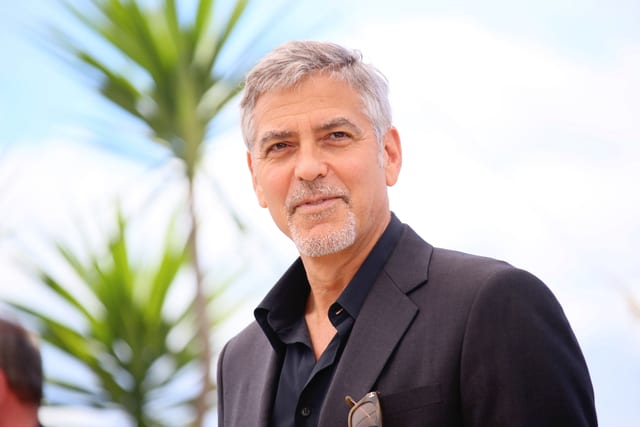 George Clooney has surprised us all by marrying not a runway model, not an actress, but a high-profile lawyer with brains and beauty.

It’s interesting to me as a Relationship Astrologer that he went for a woman who was so accomplished already, rather than a woman who is just arm candy!

In fact, he didn’t think he had a chance with Amal! He has stated that he believed that she would only view him as old rather than a potential romantic partner.

Imagine George Clooney thinking you’re out of his league!

This is an interesting point because it shows that Taurus men want to pursue what is of true value. He isn’t looking for vapid, shallow, and lackluster.

I imagine that even if George Clooney were not rich and famous, he would be seeking the highest quality of product and person available to him rather than something that works for a while just to fizzle once it becomes apparent that the initial allure has faded.

This tells us that Taurus men need a stable and practical relationship of the first rate. No cheap and tawdry love affairs with these guys!

The woman that a Taurus will choose will have it all… she will be accomplished and intelligent.

When I think of Taurus men, I always see them falling for the Aphrodite type of woman. She is powerful and strong but she is known for her beauty.

Taurus men are ruled by the planet Venus. Venus is the feminine planet and the primary indicator of beauty and a love of beauty in one’s birth chart.

Despite Amal’s incredible track record as a lawyer in Great Britain and her accolades as a teacher at establishments like Columbia Law School, I cannot imagine that her obvious good looks went unnoticed by Mr. Clooney!

Her style is also top notch and since being paired with George Clooney, she has been scoped out wearing designer dresses to the red carpet with her man!

Appearances are important to a Taurus man, there’s no denying it. A Taurus man requires a partner that they find to be gorgeous and stylish. These guys want it all – no pressure, ladies!

They Respect Their Roots

In my reading about the relationship between George Clooney and Amal Clooney, I was not surprised to find out that George took the opinions of his parents into consideration when choosing Amal Clooney to settle down with.

I found out that Amal was brought to George’s home in Italy by a mutual friend who was invited for dinner. George’s parents were both present at the villa when they arrived.

They said that they could see the connection between the two instantly, and they encouraged George to pursue a relationship with Amal! Good thing she had ma and pa Clooney batting for her!

This is typical of a Taurean, as they respect their roots more than many signs. Earth signs like Taurus tend to hold to traditional values like home and family.

They also get along swimmingly with Cancers, the most emotional homebodies of the Zodiac. This implies that a Taurus can sympathize with the emotional connection to family.

George, who said he would never get married or have children, ate his words when it came to Amal and perhaps in no small part because George respected the opinions of his parents so deeply.

A Taurus being a fixed Earth sign is slow to change, and so George may have carried a lot of the way he was raised into his adult life.

This could mean that Amal is literally just the type of girl he would have brought home to ma long ago as well as now… some things never change, Taurus’ being one of those things!

They Know What They Want 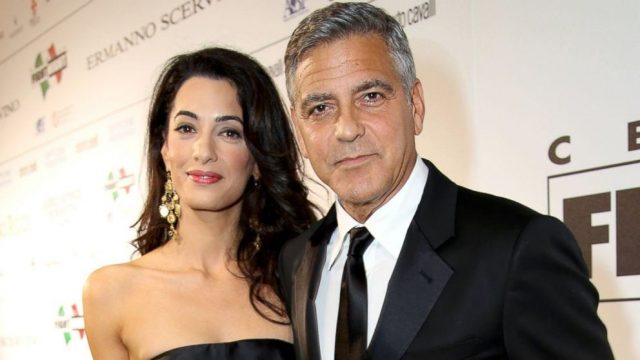 Taurus’ are typically not the fastest moving types in the Zodiac. They want to stop and smell the flowers. Despite this, it didn’t take a long time for George Clooney to figure out that Amal was worth breaking his vow to never marry again after his first marriage!

This alone is something that I want to emphasize… a Taurus changing course like he did means that he feels he found the real deal! Not much makes a Taurus do an abrupt about face like George Clooney did.

In addition, it didn’t take him long to propose! he was on one knee less than a year after meeting Amal. This instantly piqued my interest since it’s so uncharacteristic of a Taurus to move so quickly.

This is why I believe George was able to overcome the parts of his personality that might have encouraged him to hang back a while.

No sign of the Zodiac is a better judge of value than a Taurus. He was able to see the valuable person in front of him and he appreciated her for what she was.

This is one situation where a Taurus absolutely will make a move! When he sees something of high quality, he won’t hesitate to make it his.

They Have a Sense of Humor

This is one that does not come up often enough with Taureans…they can have a bit of a twisted sense of humor, as George proves through his charming anecdotes.

He says that he likes to pick on Amal by teaching their children gross pranks! He has been known to play pranks on his fellow celebrities as well.

With his children, he incorporates a Taurean appreciation for food by telling his kids to put Nutella in their diapers just to take them off in front of Amal and eat it!

This is not only endearing, but it is also revealing. He and Amal obviously share a lighthearted bond. This is typical of the signs that are ruled by easygoing Venus.

It’s clear to me that we can infer that family life has made George relax and take life in stride. This is due in no small part to the joy that Amal has brought him.

As a Taurus, he knows not only what is of value but also what is worth investing in. He has chosen to invest heavily in his family and his home, by the sounds of it.

This is an investment that I do not see him regretting! It is clear that he considers Amal to be worth the effort.

The fact that he wants to put a smile on her face through their children’s antics tells me that he cares about her happiness and that he goes out of his way to keep levity flowing in their household.

Read next: The Relationship of Mila Kunis and Ashton Kutcher – A Fated Union

Bringing It All Together

Love can be a fickle creature, but a Taurus will do anything to dismiss this aspect. They want predictable joy in their relationships.

Amal Clooney is the gorgeous, successful, and brilliant woman of George Clooney’s dreams, and a lot can be said about Taurus men through his relationship with a woman of her caliber.

She demonstrates the Taurean love for sustainable quality within the people he associates himself with… and boy does she deliver! George knew when he met her that this was a woman that he had better lock down at warp speed before she looked elsewhere.

We can also know that George himself is a man of quality, or else Amal would not have given him a chance. Such an intelligent woman would know a good man when she saw him.

If all of the goodness between them wasn’t enough, it appears that George’s parents adore her and this goes a long way with Taurean types with a deep reverence for their roots.

George Clooney has found a woman who seems to be providing all of the comfort and security that a Taurus could desire.

Have you ever dated a Taurus man? What did you learn about Taurus men in general during this experience? Please let me know down below in the comments!

Want to know if the Taurus man is your true match? Take my quiz here to find out!

And if you are interested, I have a book that will give you the full scoop on the Taurus man. Taurus Man Secrets is everything you want to know about how these men operate! Find it here.

Wishing you all the luck in the Universe,