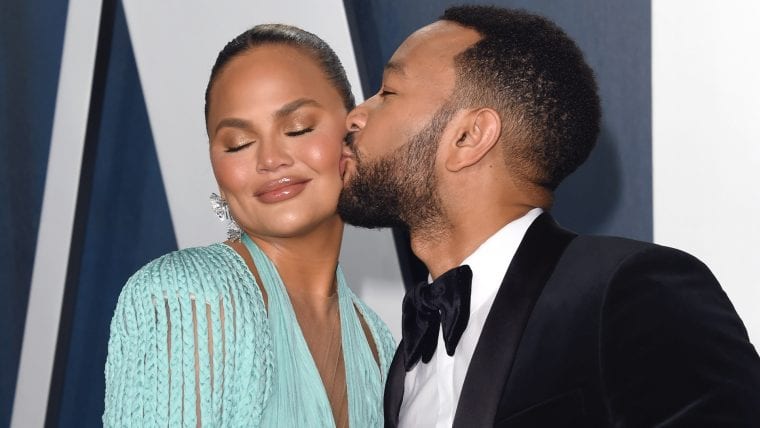 You may be wondering how supermodel Chrissy Teigen won the heart of People’s sexiest man of the year, hit singer John Legend.

Was it her charming laughter and humorous nature? Or was it her passionate spirit and sexual prowess that caught his eye?

After exploring their astrological love compatibility, I would say that it was Chrissy’s radiant personality that captured the one and only John Legend.

But before I go deeper into their love story, let’s take a look at who John Legend and Chrissy Teigen are as individuals. 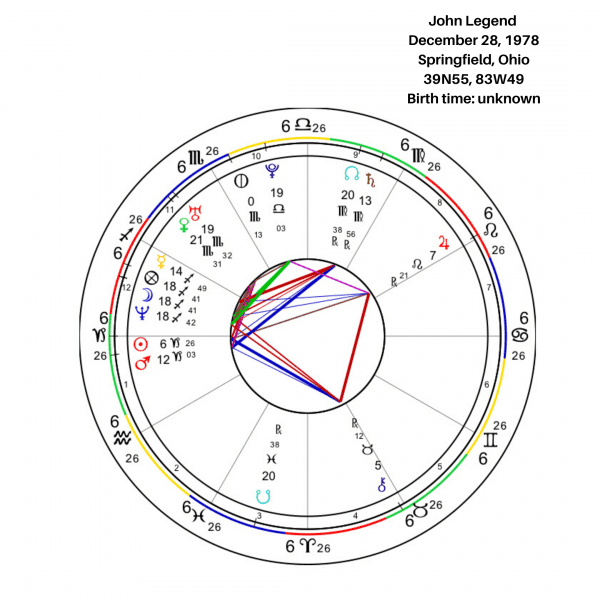 I’ve found that men born in the season of Capricorn are naturally accomplished businessmen. They tend to start their careers at a young age and lean toward entrepreneurship from the start.

Ambitious John showcased his entrepreneurial spirit when he began producing, writing, and promoting his records after college. He did this while working as a consultant for a management company full-time.

What I find most interesting about John’s birth chart is that his Earth placements are perfectly balanced by fire, showcasing his humorous, passionate, and joyful aura. Unlike some Capricorn Suns who can come across serious and overly materialistic, John Legend is funny, light-hearted, and charismatic, all driven by his witty Sagittarius Mercury and Moon.

In Astrology, a Sagittarius Mercury and Moon placement produces a charming storyteller, adventurous lover, and professional daredevil; he wants to take on the roles that others are afraid to explore.

At the same time, John’s Venus in Scorpio brings smooth sensuality and depth to his intimate relationships. He wants to take his time and get to know you on a soul level.

The Venus in Scorpio man tends to consume himself with the woman he loves. He possess a rare attraction that knows no limits, depths, or boundaries, but he will only pursue you on his own time when he feels it’s right and knows he’s ready.

Venus in Scorpio would also explain John’s sweet melodies of love, partnership, and pain. Scorpio inspires vulnerability, transformation, and unconditional love, and in true Scorpio fashion, John channels his private affairs into his work. An example of this is his music videos for “All of Me” and “Love Me Now,” which both feature his celebrity wife Chrissy Teigen and young daughter Luna.

Behind the charm, laughter, and award-winning voice is also a responsible, caring, and accomplished father and devoted husband who takes pride in being a stable provider and active participant in his family.

With John’s Mars in Capricorn supporting his Cap Sun, he is consistent, reliable, and highly paid in his industry.

He has a professional demeanor that brings keen executive skills to boost his talents, making him a well-rewarded master of his craft and public image.

Because of this, he will take material advantage of his “branding,” which brings him prestigious opportunities like working with President Obama and being a hit host on The Voice.

Mars also represents his sexual nature, determining how he will express his physical desires and emotions in love and sex.

I believe this explains why John took the “wait and see” approach in his six-year courtship with Chrissy Teigen, even though they hooked up and hit it off on the first night.

On the other hand, Capricorns have strong sexual appetites, and as you will see, this is very compatible with Chrissy’s strong, fiery nature. 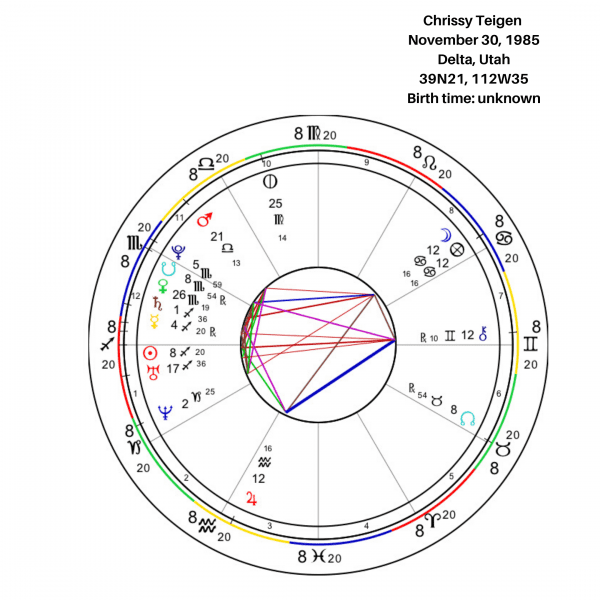 Famously known for her distinguished model debut with Sports Illustrated in 2010 and cover shoot in 2014, Chrissy Teigen is a feisty, witty, and dynamic Sagittarius mother, wife, and television personality.

Chrissy is a natural storyteller with a way with words, and she uses this to her advantage to expand her opportunities. This willingness to expand and discover new opportunities eventually led her away from modeling and into the TV screen.

But with her Moon in Cancer, Chrissy’s bold and honest nature primarily comes from self-esteem issues faced as a child.

However, with time, patience, and thick skin, she learned to accept her differences and find humor in them. She speaks of this often in her books and social media postings.

Chrissy’s Moon in Cancer placement also showcases her strong relationship with her mother. Even in Chrissy’s adulthood, her mother still plays a prominent role in her family’s life, especially with her cooking and home-goods business.

I’ve found that women with their Moon in Cancer tend to be leaders or spokeswomen for motherhood and women’s issues.

With Chrissy’s Mercury, Jupiter, Saturn, and Sun all in Sagittarius, she has strong ties to social justice and published materials. Because of this, she uses her platform to entertain but also to bring awareness.

In love, Chrissy Teigen shares her husband’s Venus in Scorpio. This placement deepens her ability to love others on a subconscious level beyond illusion and thought.

I believe Chrissy’s Venus in Scorpio placement is what gives her a natural sex appeal. Without trying, she gives women the confidence that they can love themselves in whatever shape or form, especially after they’ve given birth.

Most importantly, I believe Chrissy’s Mars in Libra is what makes her such a good wife—and what also attracts her to a grounded and reliable man like John Legend.

As a relationship astrologer, I’ve found that women with Mars in Libra tend to be indecisive in love. They are natural flirts and don’t have a problem doing the “friends with benefits” thing. They’re also total believers in love at first sight.

But at the same time, they desire men who are strong-minded and reliable; they want someone who can provide them with a life of influence, luxury, and creative exploration.

On the surface, John doesn’t necessarily appear to check all of these boxes, but underneath the surface, his Sagittarius placements bring out his inner fire.

Ultimately, Chrissy’s joy, laughter, and free spirit won the heart of John Legend. Together, they are one of Hollywood’s most enjoyable couples. 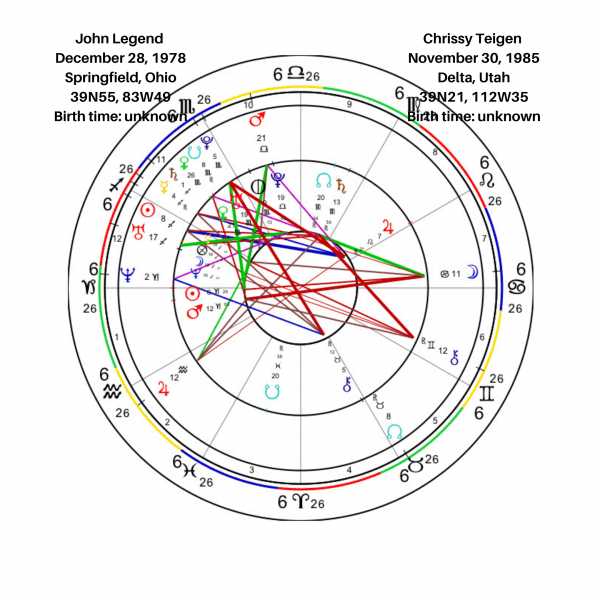 Chrissy Teigen and John Legend are known for their talent, good looks, and beautiful babies. But behind the scenes, this couple’s love story is so much more.

As two adventurous and open-minded individuals, they did what I would advise any of my fire- and earth-driven clients to do: they let their love affair bloom organically with time.

Both with their Venus aligned in Scorpio, it’s safe to say they speak the same love language. And with John’s Mercury in Sagittarius influencing his blunt and comical communication style, he isn’t offended by Chrissy’s sharp tongue.

To understand how all this comes together, we need to compare and contrast their birth charts.

Let’s explore their synastry based on their Sun and Moon signs.

Read next: The Secret Behind Emily Blunt and John Krasinski’s 10-Year Marriage

For starters, John Legend is a Capricorn Sun, and Chrissy Teigen is a Sagittarius Sun.

Because they are one Zodiac sign apart, some astrologers would say these two signs are not compatible. Sagittarius tends to be too scattered and optimistic for practical Capricorn, and this can lead to a natural separation over time.

However, I’ve found that with cooperation and intention, Capricorn and Sagittarius Suns can have a viable relationship that is long-lasting and fulfilling.

But to get there, both signs have to be willing to embrace their differences. Sagittarius Chrissy will need to find practical ways to channel her ambitions so John knows how to support her.

Capricorn John will also need to be open-minded and easy-going. Instead of being so attached to the material benefits of life, Chrissy will inspire him to be more adventurous and curious. She will open his mind to diversity and the beauty of culture.

Interestingly, I believe their earth and fire Sun combination is what gives them such success. John brings organization and professionalism to Chrissy’s wild ideas, and with John’s Sagittarius Mercury placement, Chrissy’s Sun may bring him new opportunities to communicate and share his message in media and film.

An example of this would be Christmas at Home with John and Chrissy, a reality TV special bringing you (the viewer) into a Christmas-themed party at the Legend-Teigen home.

Since both Sun signs are associated with authority, the public, and leadership, it’s no coincidence that both are attracted to someone respected in their field.

A mutual Venus in Scorpio placement also intensifies their magnetic appeal to the public. Together, John and Chrissy possess an enormous influential power of their peers. Their devout social media followers are an example of this.

Based on their Sun signs, I would advise them to always maintain their spark and keep things light. Don’t lose focus on what matters—building a legacy while having fun.

Read next: 4 Reasons Not to Start a New Relationship During Pluto Retrograde 2020 (and How to Make It Work If You Do) 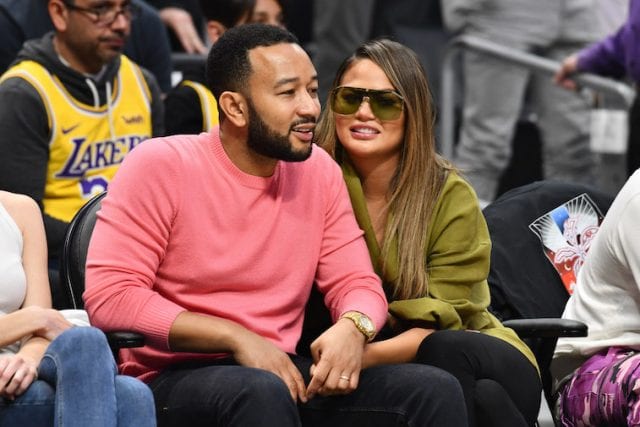 In relationships, the Moon sign and placement represents how each partner processes and expresses their emotions.

With John being a Sagittarius Moon and Chrissy being a Cancer moon, they process and express emotion in different ways.

However, because their Moon signs are compatible with each other’s Sun signs, the challenging effects of their moon placements are minimized.

Emotionally, John Legend’s Sagittarius Moon makes him something of a believer and optimist. Internally, he is always searching for the light in life, especially when it comes to self-expression and learning new things.

In relationships, this curious quality slows his desire to settle and marry; he would rather explore his interests and desires first.

On the other hand, Chrissy Teigen’s Cancer Moon makes her something of a feminist but also a natural caregiver. Internally, her deepest desire is to nurture and help others feel safe.

This motherly quality inspired the fearless protector and matriarch the world has come to know and love. She is emotionally fulfilled through comforting activities like cooking, eating, and spending time with family.

Chrissy’s Cancer Moon will instinctively pick up on John’s intense sexual nature, even though his Capricorn Sun and Mars will try to keep things professional.

In circumstances where John is too caught up in his interests and Chrissy is too deep in her feelings, their opposite Lunar natures can balance each other out.

John can calm Chrissy down and bring her out of her head, and Chrissy has a way of tapping into John’s most private and sacred feelings.

As parents, both Chrissy and John will have a desire to be very hands-on with their children. John believes in adventure and lived experiences, and Chrissy believes in love, nurturance, and lots of hugs and affection.

What I love most about their Moon compatibility is their ability to respect each other’s opinions, even when Chrissy may be overly sensitive and John can sometimes be too cool or unintentionally harsh.

Either way, their shared understanding and respect for one another’s commitments and personal interests increase their likelihood of a successful and fulfilling marriage.

In overall compatibility, I would give John Legend and Chrissy Teigen a score of 9 out of 10 in love.

My parting advice to John and Chrissy is to always stay youthful and spontaneous. Never let society tell you that your love has to be traditional or common. In the words of John Legend himself, “All of me loves all of you.”

Are you wondering how well you and your love are matched? Are you dating a Capricorn man?

Try out my free compatibility quiz to see if you and your partner are in it for the long haul.

And while you’re at it, go ahead and download my digital guide Capricorn Man Secrets for the best tips and advice on attracting a Capricorn man.