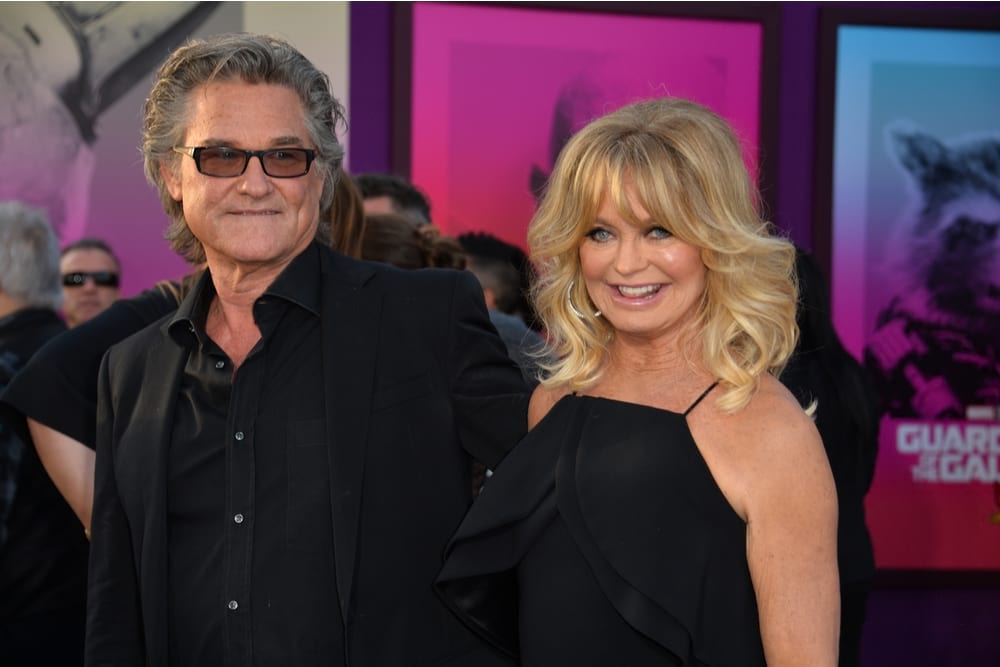 As one of the longest standing couples in the industry (they’ve been together since 1983), you may be wondering what the Stars have to say about their iconic love at first sight story.

From their instant connection on the set, to their legendary film together, Overboard, and cheating scandals in the tabloids, the astrology of Goldie Hawn and Kurt Russell bring insights into why these two may be the perfect match.

To understand how astrology can play such a pivotal role in a relationship and marriage, I am going to compare and contrast Goldie and Kurt’s chart as individuals and their synastry, shared chart as a couple.

Keep reading to find out the secrets to their long-lasting relationship! 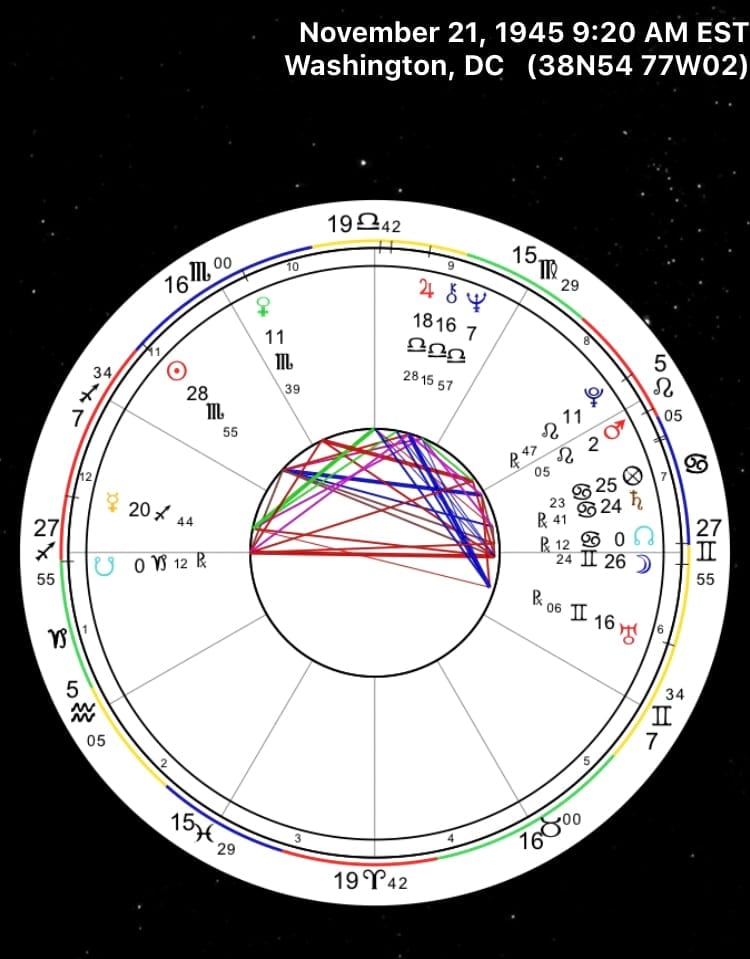 Quirky, loud, outgoing, mysterious, spiritual, eccentric, and outspoken — all words I would use to describe Goldie Hawn based on her birth chart.

When I look at Goldie Hawn’s Birth Chart, I see a strong-minded, sensual woman with deep ties to her spirituality.

However, Goldie’s strong fire placements build an even stronger attachment for her desire to create and explore.

If I could use one phrase to describe Goldie’s primary placements, it would be “showstopper!”

Her storytelling Sagittarius Rising and confident Gemini Moon know how to put on a show and borrow the light from any room.

Being that Gemini and Sagittarius are the Signs most associated with comedy and performance art, it’s no surprise that Goldie started her career in entertainment as a dancer, which later led to her breakout career on television and soon, on film.

As a playful and open-minded Sagittarius Rising and Gemini Moon, I am also not surprised that Goldie chose romantic comedy out of all genres of film.

Rather than just being another pretty face, Goldie wanted to use her beauty and joyful personality as a source of laughter and entertainment. She often played the role of the “dumb blonde” in her hit films.

When it comes to her long list of lovers, relationships, passionate affairs, and ex-husbands, these are all attributes of Goldie’s tenth house Venus in Scorpio.

As a woman whose Venus is in Scorpio (which is also the sign of her Sun), Goldie is very open and confident in her sexuality.

She finds great pleasure and explores the depth of her passion and emotion with men.

However, with her Mars in Leo, which is one of the most non-committed placements for relationships, Goldie wants someone who allows her to be fun and outgoing.

She enjoys Leo’s playful nature, but she is also free-spirited and possessive, she needs to have control and feel free in order to commit to love. 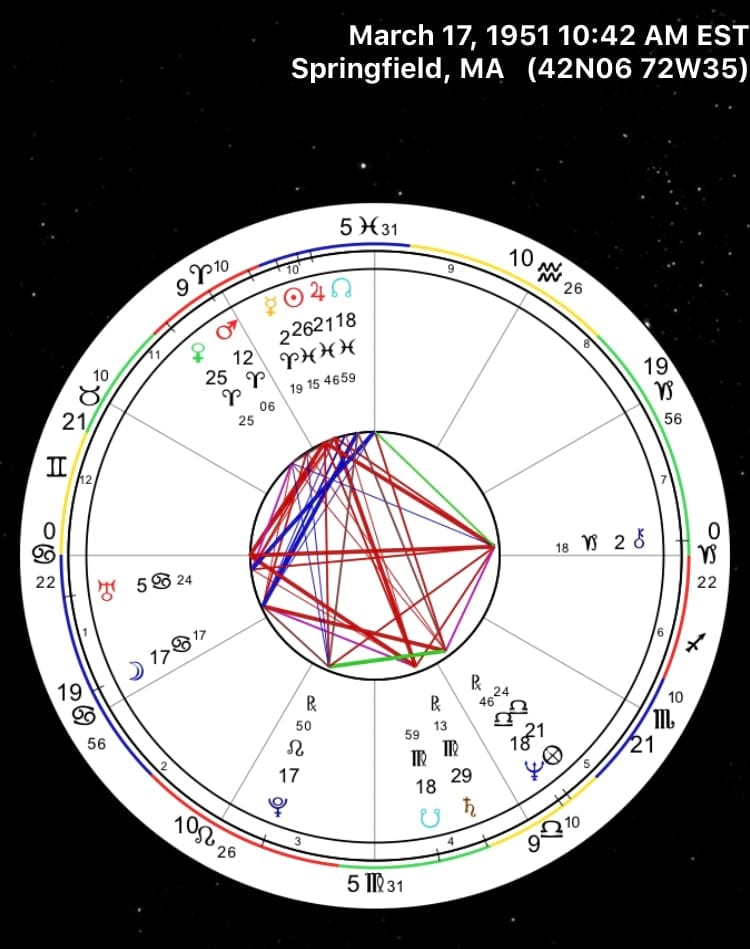 When it comes to Kurt Russell’s natal Chart, he is very different from his eccentric, long-time partner and lover, Goldie Hawn.

Although they both carry the elements of water and fire strongly in their chart, Kurt’s triple water energy brings a more cool-headed personality.

Born on March 17, 1951 at 10:42 A.M. in Springfield, Massachusetts, Kurt Russell is a creative Cancer Rising, Pisces Sun, and Cancer Moon.

As a young Cancer Rising at 0°, Kurt Russell’s mission in life is learning what it takes to build an emotionally fulfilling life and legacy for his family.

As a relationship astrologer, I’ve found that most Cancer Rising men who also have Cancer Moons are very traditional and have strong ties to their immediate family.

Very much like his father who was a professional actor and baseball player, Kurt Russell was a child actor who played baseball up until an injury guided him to a different calling, and he went back to his life of cameras and Hollywood fame.

However, what’s interesting is that Kurt Russell’s primary placements (Sun, Rising, and Moon) are in water signs, and his secondary placements (Mercury, Venus, and Mars) are all in the fire placement of Aries.

This means that Kurt Russell is a creative man with the know-how to make his dreams a reality, as long as his procrastinating Pisces Sun doesn’t become a problem.

But with his Sun in his tenth house of career and public reputation, I don’t think that will be a problem.

Kurt Russell’s strong familial support from a young age, and his healthy relationship with his father gave him the consistency and emotional support he needed as a child to boost his self-confidence.

On a relationship level, Kurt’s stellium in Aries indicates that he is a passionate and sometimes self-serving lover. He must learn from an early age to be a team player and be honest about his intentions and his needs.

Some may honestly say, depending on who you talk to, that Kurt is aggressive and sometimes overly assertive.

With Mars in his eleventh house of groups and higher vision, Kurt may have a hard time working with others if he isn’t always in charge or playing the lead.

On a positive note, I believe this influence plays a major role in why he was the leading face of Disney for ten years consecutively. He was and still is a major source of inspiration for his peers. 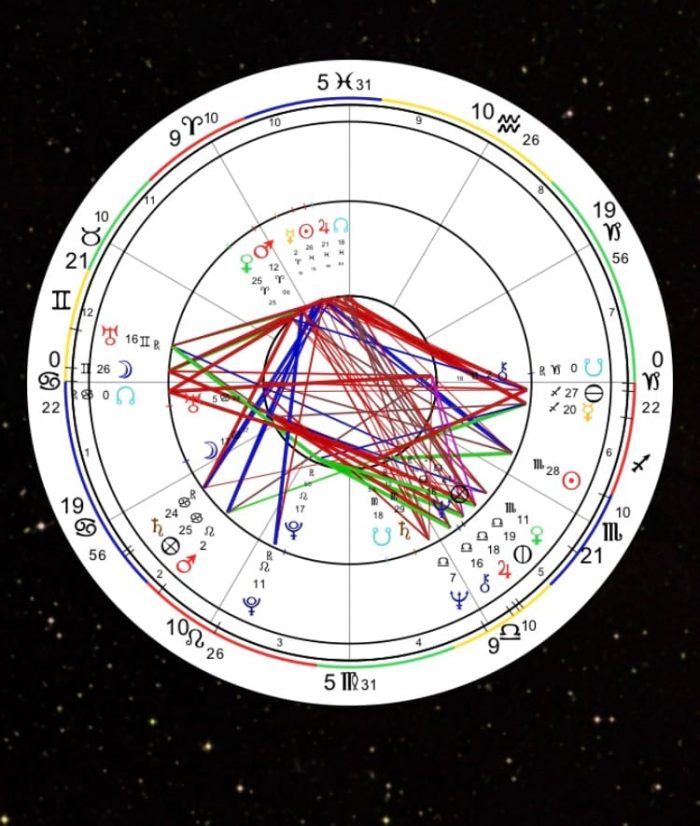 As a Sagittarius and Cancer Rising, I’m not really sure how these two opposite Rising signs get along.

For starters, the Rising sign in astrology represents the dominant personality, or how one sees you.

Therefore, in a relationship, the Rising sign helps you understand how you see each other, and any common indifferences you may have based on your personality.

When it comes to Goldie Hawn and Kurt Russell, their rising signs are in opposite elements and modalities, they don’t really understand each other.

For example, Goldie is a Sagittarius Rising. Based on her mutable fire nature, she is free-flowing and lives for anything spontaneous.

She is more philosophical and believes deeply in living life based on higher principles and spiritual beliefs.

When it comes to Kurt, his Rising is in Cancer, a cardinal water sign that lives for tradition, emotion, family, and a strong material foundation.

Because of their strong personality differences, their initial attraction was based more on opposite forces rather than common interests and goals.

They are more different than they are alike.

On the positive this, the difference in personality is rewarding because Goldie can teach Kurt how to loosen up, and Kurt can teach Goldie how to settle down — they balance each other out.

In relationships, a couple’s Sun Sign Compatibility represents their common interests and general focus in life. It represents how well their external desires and goals align.

For Kurt and Goldie, their water-sign Suns have a general understanding and silent respect for one another. They can easily feel each other out.

As a Pisces Sun, Kurt is helpful, giving, and imaginative.

As a Scorpio Sun, Goldie is intricate, obsessive, mysterious, and passionate.

Although they are both water signs, their modality (how they process and project information) is what differs.

Kurt, the Pisces Sun is mutable, which means he goes with the flow.

Goldie, the Scorpio Sun is fixed, which means she is fixated, things must always flow one way (her way).

Together, Scorpio and Pisces create a deep level of intimacy, shared creativity, and trust.

Kurt will often find Goldie inspiring and transformational, always encouraging him to face his fears.

On the other hand, Goldie will find Kurt calming and nurturing, always there to reel her back in or protect her when she’s gone too far.

If I could give Kurt and Russell some love advice based on their Sun Sign Compatibility, I would advise them to be more practical and understanding about their desires.

Both Kurt and Goldie have strong emotions, especially Goldie.

Therefore, it can be easy for disputes to spin out of control.

If they want to survive their partnership happily, they need to set strong boundaries and create a healthy connection that maintains emotional independence and balance.

Read next: Inside the Love Astrology of John Travolta and Kelly Preston

If I had to give Goldie Hawn and Kurt Russell a love Compatibility score out of 0 to 10, I would give them a 5.

Yes, there are several positive planetary placements that indicate a long-lasting matrimony, but it doesn’t always indicate a happy one.

Unless Goldie learns to manage her love of extremes, and until Kurt learns to embrace his need for more passion and diversity in his life, I’m afraid these two will stay together out of convenience — or even worse, marital habit.

I wouldn’t be surprised if this was the cause of their brief separation in the late 90s and early 2000s.

Are you wondering if you and your partner are a good match?

Do you want to see if you have what it takes?

If yes, take my Free Love Compatibility quiz and make sure to share your results!

Sending you lots of love on your journey.

If you’re ready to understand more about how compatible are Pisces man and Scorpio woman, check out my brand new Pisces Man and Scorpio Woman Love Compatibility Guide, and if you want to catch him and keep him click here to learn more about Pisces Man Secrets.

September’s Full Moon In Pisces: What To Expect

How He Sees Commitment Based On His Zodiac Sign

The Predominant Element In Your Chart: Here’s What It Means

What Your Ruling Planet Says About You: According To Your Zodiac Sign